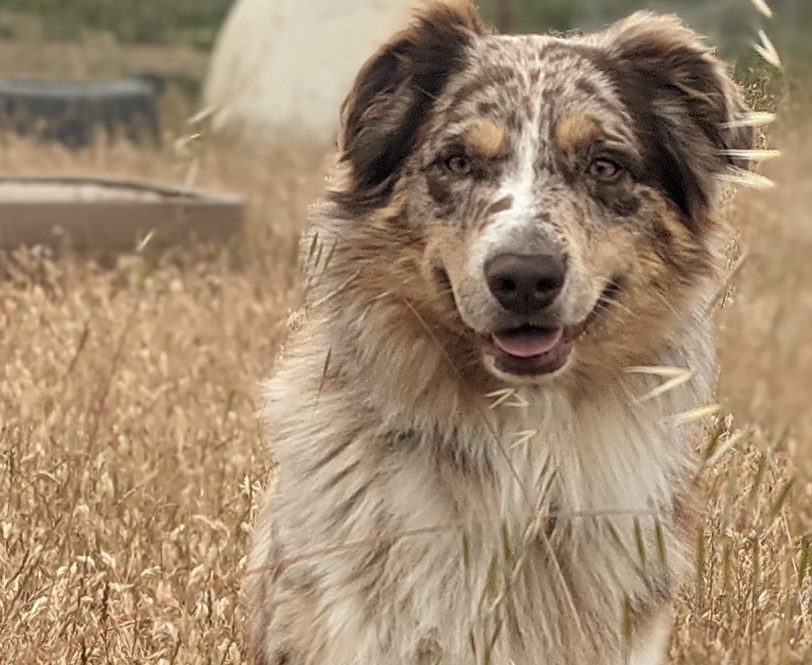 Danger is the product of thirty years of studying the breed and what ranchers want and need. It started with his grandmother who was athletic, spritely, had zero quit, worked well no matter where you took her, had incredible ethic and fight as needed. She was also very very sharp with people and took a lot of management in her early years. I bred her to a dog that was an old soul to get his mother - who has been described by pet people as "the ideal dog" to take around, she's great with our kids and others' - and was described by a stock dog trainer as a top notch cattle dog, but with a novice handler. She has a beautiful walk up on cattle and holds her ground, but she also doesn't have quite as much want and drive as her mother . . .

So we made Danger Mouse. Danger is a lot of dog, but his entire purpose was to take the progress we'd done with the first two generations and cement it into a stud dog that would add quiet, confident power and drive to a breed that has a hard time finding it consistently. He has zero quit, is athletic, and a great drive to please.

He hits heads and heels, but favors heads. He works naturally out wide and has a pretty good sense of balance but not as natural as I'd like.

He's also really well built - while I have a taste in my dogs, it wasn't my goal to make such nice conformation but he's pretty much a dream to watch move around.

He has the same confident walk up as his mom, and the most awesome sense of group - while being able to redirect his attention to certain groups and not get hung up on what his instincts tell him.

Personality wise, he is a high drive, highly sensory dog. He was a slow maturing dog - coming into his own when he hit about three years old. I feel that earlier maturing dogs are something ranchers want so this is something we need to work on.

He is a bull in a china shop - literally throwing himself at everything he does.

He is friendly to strangers on his own terms, loves other dogs when meeting them off lead. He does not have a strong protection drive, but he will exhibit aggression if restrained (aka, will bark and warn if on leash or in an enclosed space - and it sounds SCARY).

He is eager to please and shows disappointment when he's wrong or corrected, has a nice off switch, but he is also a lot of dog for someone looking for a pet: he is most happy when actively working with me or being given down time in his crate or kennel. He is not a great family dog - he prefers time alone with one person and no other dog or person. He literally checks his watch at night and requests to be locked up around 9:30 vs spending time with us on the couch.

He is clear on his genetic panels and does not carry anything Australian Shepherds are tested for (including being MDR1 nonreactive).

Aside from stockdog training, he is being casually trained in obedience and agility, with no real future plans to trial him.

Danger's pedigree reflects my focus on line breeding to Slash V Andrews' Red Chickaspike - a using dog that worked on a cattle ranch that embodied everything an Aussie should be - will to please, problem solving, moving cattle in whatever way he was needed, and being his owner's buddy.

I decided to go to Twin Oaks for his sire line this round because they add a little more softness to the working style that the dogs in the dam line. This has proven to have worked out well for us. Danger's dam, Rippa, has been compared to Twin Oaks Tuff Zippin, which is what sealed the deal for me, that and the fact that his sire, Rush is on a cattle ranch as a chore dog but definitely caught the eye of respected Aussie judges at the limited trials he attended.

The proof for me is if these dogs can get used, not if they can trial well. While the pedigree above doesn't reflect all the titles the dogs earned (the database doesn't update all the titles regularly), it shouldn't matter. I'm confident when bred to a compatible bitch, the puppies will produce fine using dogs for ranches, which is why he stands at stud now.